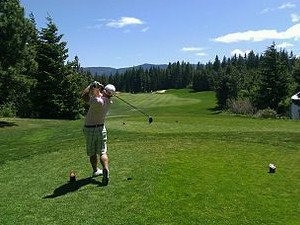 Object of the Game

The object of the game is simple enough: to get your ball from the tee (the starting point of any hole) to the green and ultimately into the hole in as few shots as possible. “The hole” refers both to the physical hole marked by a flag into which the ball must be sunk and also the entire area from the tee to the green. This may be considered one unit of the course, with a standard course consisting of 18 separate holes played in turn.

Golf is usually played individually, with a professional tournament generally consisting of around 80-160 players playing in groups of three or four, competing against each other. There are also team tournaments, the most notable being the Ryder Cup played between Europe and the USA. In this format 12 players from each side compete in a mixture of singles matches, played one against one, and doubles, two against two.

The equipment used in golf is highly regulated, with exact specifications for almost everything, from the exact make and model of clubs that are allowed, to the size and shape of the grooves on their face (the surface with which the ball is hit), to the precise weight and aerodynamic capabilities of the ball. Due to the fast pace at which technology is improving this has been a difficult area for the governing body, the R & A, to regulate.

Players are only allowed to carry and use 14 clubs during any one round and in addition to the clubs and ball the players normally wear a glove on their left hand (for right-handed players) and also use tees, small pegs, to elevate the ball for the first shot on any given hole.

Confusingly the part of the course the first shot is made from is also called the tee and golf is unusual among ball games in not having a standardised pitch or playing area. Although all courses will have the same features, such as tees, greens, fairway and hazards, the exact layout and size varies, making each course unique, which is very much part of the game’s allure.

The most common scoring method in golf is called stroke play, where the total number of shots a player takes to get the ball into each hole is added together. At amateur level this is usually over one round (set of 18 holes) whilst professionals normally play four rounds, starting on a Thursday and finishing a tournament on the Sunday.

The score is expressed in terms of under or over par. Par is the number of shots a good golfer (someone playing off “scratch”, or a handicap of zero) would expect to complete a given hole in, with one always allowed for the tee shot and two putts (shots played on the smooth, prepared area around the hole called the green). Being under par is a good thing as you have completed the hole in fewer shots than expected.

Apart from stroke play the other main scoring method is match play. Under this system whoever completes each hole in the least number of shots wins that hole or if it is level the hole is “halved”. The overall victor is the one who wins the most holes, with results normally expressed as “3 & 2” for example, meaning one player was three holes in front with only two left to play.

In addition there are also Stableford, skins and other scoring methods but these are predominantly only used in amateur play.

Most pro events, including all four of the game’s Majors (the biggest, most valuable, prestigious tournaments each year) use the stroke play system. Events are held over four days and the winner is the player who completes 72 holes (four rounds of 18, almost always on the same course) in the fewest number of shots (also called strokes).